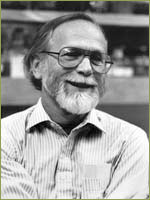 J. Michael Bishop was born February 22, 1936, in York, Pennsylvania. He completed his undergraduate degree at Gettysburg College, majoring in chemistry, and eventually chose medicine as a career. He entered Harvard Medical School, became interested in basic science, and began research in animal virology, where he "learned that the viruses of animal cells were ripe for study with the tools of molecular biology." He received his M.D. degree in 1962, and in the next two years he completed internship and residency at Massachusetts General Hospital. In 1964 he was appointed postdoctoral fellow in the Research Associate Training Program at the National Institutes of Health. At NIH he pursued virology research with his mentor, Leon Levintow, and spent a year doing research in Hamburg Germany. He then chose to accept a faculty position at UCSF, he recalls, "because the opportunities seemed so much greater: I would have been a mere embellishment on the East Cost; I was genuinely needed at San Francisco."

He arrived at UCSF in 1968, hired as an assistant professor of microbiology and immunology and continued work in virology with Leon Levintow, who had joined the UCSF faculty two years earlier. Bishop became a full professor in 1972, and in 1981 was appointed director of the G. W. Hooper Research Foundation. In the mid 1980s he also became director of the Program in Biological Sciences (PIBS), a pathbreaking interdisciplinary program in graduate education.

As he developed his research program, Bishop began to study retroviruses, and utilized reverse transcriptase to explore viral DNA. In 1970, Harold E. Varmus joined Bishop as a postdoctoral fellow, and Bishop recalls, "Our relationship evolved rapidly to one of coequals, and the result was surely greater than the sum of the two parts". For the next two decades Bishop and Varmus identified and clarified the process of how Rous Sarcoma Virus transforms normal cellular genes (proto-oncogenes) into cancer genes (oncogenes). In 1989, Bishop and Varmus were awarded the Nobel Prize in Physiology or Medicine for the discovery that growth regulating genes in normal cells can malfunction and initiate the abnormal growth processes of cancer. Bishop is the recipient of numerous awards in addition to the Nobel Prize, including the Albert Lasker Award for Basic Biomedical Research, and the American Cancer Society National Medal of Honor. In 2003 he was awarded the National Medal of Science.

On July 1, 1998, J. Michael Bishop became eighth chancellor of UCSF, and presided over what would become the largest academic biomedical expansion in the nation-the creation of the UCSF Mission Bay campus. Mission Bay formally opened in 2003, and by 2008 includes four research buildings (Genentech Hall, Rock Hall, Byers Hall, the Diller Cancer Research Building), and the William J. Rutter Center. Bishop retired as UCSF Chancellor in August 2009, with the distinction of longest term of service in that office.

For a lively autobiographical account of Dr. Bishop's life and work, see, How to Win the Nobel Prize: An Unexpected Life in Science. (Cambridge Mass. & London, England: Harvard University Press, 2003).