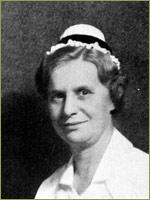 Pearl Castile was born in rural Nebraska in 1891 and completed an A. B. degree in liberal arts from the University of Nebraska. After two years as a secondary-school teacher, she enrolled in the Massachusetts General Hospital School of Nursing and began a lifelong career in nursing, receiving her diploma in 1922. For the next ten years, she served in leadership roles at midwest and California schools of nursing, and she earned a Masters Degree in the Berkeley School of Education. In 1929 she was recognized as an “Eminent Teacher” by the American Journal of Nurses.

In 1933 she was recruited to the University of California to serve as instructor and supervisor of surgical nursing at the University of California Hospital. A well-known figure in California nursing by this time, Pearl Castile brought name recognition to the UC Training School, and helped steer the school through the difficult years of the Great Depression. She was active in professional organizations at all levels, serving as board member and officer of the California State Nurses’ Association, the California State Board of Nurse Examiners, the National Association of Collegiate Schools, and the National League for Nursing Education.

When Pearl Castile joined the UC nursing faculty in summer of 1933, the Training School had just closed the diploma track and shifted to a baccalaureate program, and the nursing program was on the cusp of change. During her first four years as supervisor of surgical nursing she was an active mentor on the wards, teaching basic nursing care and the prevention of the spread of infectious organisms to students, and developing leadership skills among young head nurses. A very effective teacher, she was able to sustain personal relationships among both students and faculty, and colleagues remember “her warmth, understanding, listening ability, sense of humor, and practical suggestions, [which] tided over many difficult situations.” When Margaret Tracy arrived to lead the school in 1934, Miss Castile assumed a critical supportive role in the school’s administration, acting as Tracy’s “indispensable assistant” for more than twenty years. She is remembered for her “unswerving loyalty” and full support of the campaign to create an autonomous School of Nursing. When Margaret Tracy was named dean of the new School of Nursing, Pearl Castile became assistant dean.

In the postwar period, as the nursing faculty resolved to earn full faculty academic status, Pearl Castile was the first (1948) to earn a doctorate, at Stanford University, completing a dissertation that was later recognized as an “outstanding” nursing research project. In the early 1950s, after Margaret Tracy suffered a stroke, Pearl Castile did much to support the ailing dean’s position, maintaining administrative duties and defending the school’s aims and policies. Pearl Castile and Margaret Tracy both retired in April 1955, shortly after the public dedication of the new Moffitt Hospital. In January the following year, an impressive crowd of faculty and alumni attended a tea honoring these two nurse educators who had dedicated their careers to the establishment of the School of Nursing as an autonomous school within the University of California.