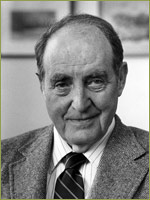 Robert H. Credé was born in Chicago in 1915, and grew up in Southern California. His father was a physician who worked for the Veterans Administration, primarily in the San Diego area, and he received his early education there. Robert Credé earned his undergraduate degree at Berkeley in 1937 and was elected to Phi Beta Kappa. He entered the UC Medical School and completed an extra research year in Herbert M. Evans’ lab under the direction of William Lyons. He earned the M.D. in 1941 and received the Gold Headed Cane award upon graduation. He went on to an internship at San Francisco General Hospital, but World War II interrupted his postgraduate training, and he joined the 30th General Hospital, serving for three years in England, France, and Belgium. He was awarded the bronze star for Meritorious Service.

After the war, Dr. Credé returned to UCSF as resident in medicine and quickly became chief resident. From 1947 to 1949 he was a Commonwealth Fellow in psychosomatic medicine at the University of Cincinnati, an experience that trained him in the bio-psychosocial approach to patients and patient care.

In 1949 he returned to UCSF as assistant professor in the Department of Medicine and he was quickly drawn into administrative work as assistant dean (1955-1960) and associate dean (1960-1973). He was named full professor in 1960 and became vice chair of the Department of Medicine. He served diligently on the admissions committee during these years and he was among the faculty who opened up the admissions process to students from disadvantaged backgrounds, beginning a trend that led to UCSF’s leadership role in developing affirmative action in the 1960s.

When Lloyd “Holly” Smith arrived in 1964 to chair the Department of Medicine, he recognized Credé’s leadership skills and asked him to develop an autonomous Division of Ambulatory and Community Medicine within the Department of Medicine. Robert Credé headed this division from 1965 to 1980. Throughout his administration, he produced a model of “comprehensive care” that brought an interdisciplinary approach to the patient. This view recognized emotional and socio-economic as well as biological factors in illness, and involved teamwork among nursing, pharmacy, dentistry and other medical specialties. Eventually UCSF’s primary care pathway directly involved internists and pediatricians, and became a model for the nation. Credé was particularly interested in creating graduate educational opportunities in the broader community and promoted regional family practice residency programs in Santa Rosa, Salinas, Fort Ord, and later Fresno. He was also one of the UCSF faculty who established the UCSF Area Health Education Program (AHEC) in Fresno.

By 1980 Credé’s clinical and academic programs expanded into two academic units which have gained national prominence: the Division of General Internal Medicine (in the Department of Medicine) and a new Department of Family and Community Medicine.

Recalling his career at UCSF, in 1994, Credé mused, “while I think we were developing for whatever reason, some of the best programs in primary care and comprehensive care teaching in the country, at the same time this place was becoming a world-renowned biomedical research center. Now, to me, that’s quite remarkable, to have two quite disparate activities developing almost like limbs of the same tree.”

During his long career at UCSF, Dr. Credé received several campus honors: in 1972 he was named UCSF Alumnus of the Year, and in 1984, he was President of the UCSF Alumni-Faculty Association of the School of Medicine. The multi-story Ambulatory Care Center, built in 1972 was named for him in 1994, and a lectureship is held at UCSF in his name.

Robert Credé retired in 1989 after forty years of service to UCSF. He died in 1996. His colleagues remember him fondly as “an ‘Old Blue’ [who] embodied the spirit of [the] institution… [his] greatest contribution to UCSF was his personal presence as a wise and thoughtful colleague, skillful and compassionate physician, an accessible and supportive mentor, as well as an educational innovator of great vision.”