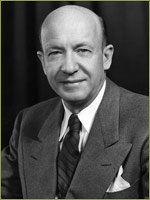 Troy Daniels was born in 1899. He graduated with a B.S. degree in Pharmacy from the University of Michigan in 1923, and then taught pharmacy and pharmaceutical chemistry at Washington State University in Pullman, Washington. In 1928, he returned to the Midwest and completed a Ph.D. in chemistry at Indiana University. The following year, he was recruited to the UC College of Pharmacy as an assistant professor to teach theoretical pharmacy and physics.

Troy Daniels arrived at the UC College of Pharmacy at a time of controversy over the length of formal pharmacy training. By 1934 these problems were resolved—the College of Pharmacy was completely integrated into the University and a four-year instructional program was in place. When Biochemist C.L. A. Schmidt was appointed dean in 1937, Troy Daniels served as assistant dean, and, in collaboration with other faculty (including Chauncey Leake), basic science instruction in chemistry, pharmaceutical chemistry and pharmacology flourished on the San Francisco campus.

Under Daniels’ direction, the School of Pharmacy created the instructional basis for a new more active role for the pharmacist by promoting advanced training in the physical and biological sciences taught by scholars in these disciplines. During his long tenure as dean (1944-1967), Troy Daniels consistently recruited instructors with doctorates in their respective scientific fields, a practice highly unusual among pharmacy schools at that time. In 1955 the College officially became the School of Pharmacy, and in 1958 Dean Daniels instituted a six-year program leading to the doctor of pharmacy degree. Eventually the School of Pharmacy’s Department of Pharmaceutical Chemistry sponsored forty graduate students and twelve postdoctoral students, creating a nucleus of graduate education on the Parnassus campus that predated the return of the basic medical sciences to Parnassus in 1958, and prompted the Berkeley-based graduate division to send representatives to San Francisco campus to meet the needs of graduate students. In 1961 the San Francisco campus obtained its own Graduate Division to serve the growing number of graduate and postdoctoral students pursing advanced basic science studies at Parnassus.

Dr. Daniels’ vision for pharmacy education emphasized that a pharmacist needed to know the physical and chemical properties of medicinal agents as well as the mechanisms of therapeutic or toxic reactions. His foresight laid the groundwork for the establishment of UCSF’s innovative program in clinical pharmacy. This was instituted in the mid-1960s, when pharmacy service was inserted into UC hospital wards and pharmacists became sophisticated drug therapy consultants to physicians. Dean Daniels’ emphasis on basic science instruction enabled the School of Pharmacy ultimately to dominate nationally as recipient of federal research funding from the National Institutes of Health, as well as in funding for chemistry research from other sources.

Troy Daniels retired from the deanship in 1967, but remained active as dean emeritus on national and international committees, as consultant to the pharmaceutical industry, and as a devoted presence in the UCSF School of Pharmacy throughout the rest of his life. He died in 1986. His colleagues remembered him as “the personification of pharmacy in all its facets during more than half a century.”