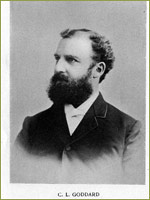 Clark Lamotte Goddard, an early leader in the dentistry profession in San Francisco, was appointed as one of the original seven-man faculty of the UC College of Dentistry in 1881. He served as Professor of “Dental Art and Mechanism”, a subject that taught dental students to “supply substitutes for lost dental organs.”

Clark Goddard served as dean of dentistry for three separate terms that alternated with the appointment of college co-founder, S. W. Dennis. This period was later named “the rotating deanship,” and probably signified an ongoing fight over the increasing specialization of mechanical dentistry and its role in the curriculum. During his fourteen years as dean, Clark Goddard presided over dramatic changes in dental practice as new materials and techniques were introduced, and laboratory and clinical instruction became dominant parts of the dental curriculum. By the turn of the twentieth century mechanical dentistry had been renamed prosthetic dentistry and involved a host of techniques and materials such as vulcanite, celluloid, gold, silver, and porcelain. By 1901, along with training in basic sciences, dental students had to demonstrate competence in treating patients “requiring all the usual dental operations…complete a set of dentures, insert a crown or piece of bridge work and bring his patient to be checked by the Professor of Prosthetic Dentistry.”

Once the College of Dentistry occupied its new space at Parnassus, Professor Goddard developed a program in the new field of orthodontia, which had split off of prosthetic dentistry as a subject in its own right. In his new program, Goddard provided lectures and clinical instruction on comparative dental anatomy using lantern slides, casts of practical cases, and an opaque stereopticon. By this time the dental faculty had increased in size, with eight full professors and large group of special lecturers and demonstrators, as well as clinical instructors. The College looked forward to development of fulltime professorships, for “men of ripe scholarship and experience, untrammeled by the cares of active practice, who, by the aid of …endowment, may have the opportunity for independent investigation to the glory of the University and the State.”