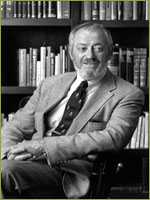 Julius R. Krevans was born on May 1, 1924, in New York, New York. He received his A.B. degree from New York University in 1944, and his M.D. degree from NYU School of Medicine in 1946. Krevans enlisted in the U.S. Army in 1948, where he served in the Philippine Islands and the Walter Reed Hospital. He was discharged from the Army in 1950, and then began a career at the Johns Hopkins University School of Medicine as a fellow in hematology.

At Johns Hopkins, Krevans went on to become an instructor, an assistant professor, a professor of medicine, the assistant dean of student affairs, and, from 1968-1971, the dean for academic affairs. He was also an active research investigator and clinician, serving as the director of the Johns Hopkins Blood Bank (1953-1962) and as Physician-in-Chief for Baltimore City Hospitals (1963-1969).

Dr. Krevans came to UCSF in 1971 as Dean of the School of Medicine, a position he held until 1982. During his ten years as the Dean, he remained active in clinical practice by taking an annual rotation in hematology at Moffitt Hospital and the Cancer Research Institute, where he was also the Acting Director. Krevans devoted his sabbatical year, 1977-1978, to patient care, alternating as Acting Chief of Medicine at San Francisco General Hospital, working in a private group practice in Berkeley, and as a practicing internist in Bangor, Maine.

On July 1, 1982, Julius R. Krevans was appointed the fifth Chancellor of UCSF. During his time as Chancellor, he created the UCSF Health and Safety Policy Board in reaction to concerns within the UCSF hospital regarding policy, HIV, and the workplace. Under his leadership, UCSF attracted many women and minority students to careers in health sciences, and strengthened programs to reach out to the local community. Dr. Krevans retired from the Chancellor position in 1993. On his day of retirement, San Francisco Mayor Jordan designated May 19 as Julius R. Krevans Day.

Krevans has served on several boards and committees, including the board of the National Academy of Science Institute of Medicine, and the American Board of Internal Medicine. He served as a director of the Clinical Scholar Program, and of the James Picker, and Bank of America-Giannini Foundations. He was a member of the Association of American Physicians, the San Francisco Planning and Urban Renewal Association, and the San Francisco Zoological Society. He was also the Chairman of the American Board of Internal Medicine's Committee on the Humanistic Qualities in the Internist. From 1980-1981, he served as the Chairman of the Association of American Medical Colleges, helping develop public policy for the organization.

Dr. Krevans has received many awards and recognition for his work and achievements. In 1978, he was named Alumnus of the Year by his alma mater, the New York University School of Medicine. He received the American College of Cardiology Convocation Medal (1984), the Abraham Flexner Award (1984), an Honorary Degree of Doctor of Humane Letters from Rush University (1984), and the UCSF Medal in 1993. He was elected to Phi Beta Kappa and Alpha Omega Alpha, and made a Commander in the Order of Merit in the Republic of Italy on February 26, 1985 and a Master in the American College of Physicians.