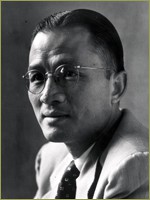 C. H. Li was born in Canton, China in 1913, the son of a successful industrialist. He received his Bachelor of Science degree at the University of Nanking in 1933 and taught chemistry there for two years before entering the Ph.D. program in organic chemistry at the University of California, Berkeley. He married a fellow chemistry student from Canton, Shen-hwai Lu (Annie). She received her masters in Agricultural Economics from U.C. Berkeley when their eldest child was two.

His first academic appointment was with the Institute of Experimental Biology under Herbert Evans. Anti-Asian sentiment was strong during the Depression, making jobs and housing difficult to find for the young scholar. Evans took an interest in Li and offered him a tiny work space in the basement of his Experimental Biology Laboratory in the Life Sciences Building at Berkeley. There Li began to develop methods for isolating the anterior pituitary hormones in pure form. Li was either the first or among the first to isolate and identify the anterior pituitary hormones. The initial breakthrough came in 1940 when he isolated luteinizing hormone. ACTH was the first hormone to be chemically identified and partially synthesized. It took 32 years of research for Li to synthesize the human growth hormone. The identification, purification and later synthesis of human growth hormone and the identification of beta-endorphin were his two most widely recognized achievements. His last accomplishment was the identification and purification of insulin-like growth factor I.

He served as Director of the Hormone Research Laboratory at Berkeley from 1950 to 1967 and at UCSF from 1967 until his retirement in 1983. He was succeeded as Director of the HRL by William Rutter. During his career, Li received many scientific awards and ten honorary degrees, and published 1,100 scientific articles with over 300 collaborators. Leading figures in protein hormone chemistry and endocrinology worked in his laboratory as doctoral students, post-doctoral fellows, or visiting scientists. Among Li's many honors, the most notable was the Lasker Award for Basic Medical Research. Although he was nominated at least twice for the Nobel prize, this highest of scientific awards eluded him. Li headed the Laboratory of Molecular Endocrinology from 1983 until his death in 1987.