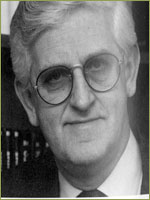 Joseph Boyd Martin was born in Bassano, Alberta, Canada in 1938. He received both his B.A. and M.D. degrees from the University of Alberta, Edmonton, the latter in 1962. In 1966, he completed his residency in neurology, and in 1967, he completed his fellowship in neuropathology at Case Western Reserve University in Cleveland, Ohio. After completing his fellowship, Martin continued his education and received a Ph.D. in anatomy from the University of Rochester in 1971.

Martin began his academic medical career at McGill University in Montreal. In 1977, he became the Chair of the Department of Neurology and Neurosurgery at McGill. He left Montreal and joined the faculty of Harvard Medical School in 1978 as the Bullard Professor of Neurology and Chief of the Neurology service at the Massachusetts General Hospital. At Harvard and Massachusetts General, Martin sought to combine research and patient care. His research focused on the causes of neurological and neurodegenerative disease. He founded the National Institutes of Health-sponsored Huntington Disease Center, where research led to a breakthrough in the identification of a genetic marker near the gene for Huntington's chorea. Martin was instrumental in the establishment of the Massachusetts Alzheimer's Disease Research Center in 1984.

Dr. Martin moved to San Francisco to become Dean of the School of Medicine at UCSF in 1989, a position he held until 1993. As Dean, he established the W.M. Keck Foundation Center for Integrative Neurosciences, dedicated to combining studies of the brain and behavior in order to learn more about the process of human sight, speech, hearing, and thinking, as well as how the brain recovers from injury. He established the Gladstone Institute for Virology and Immunology, the second largest basic research unit in the country dedicated to fighting AIDS. Martin also began planning for a National Cancer Institute-designated Comprehensive Cancer Center.

In 1993, Joseph Boyd Martin was appointed UCSF's sixth Chancellor. During his time as Chancellor, he made a long-term development plan for the renewal of the campus, which included an arrangement with the City of San Francisco to expand the UCSF Campus to a second major site at Mission Bay. Martin retired as the Chancellor in 1997. At that time he returned to Harvard and became the Edward R. and Anne G. Lefler Professor of Neurobiology, and served as Dean of the Harvard Faculty of Medicine. In 1998, he was a recipient of the UCSF Medal.

Joseph B. Martin has published more than 300 scientific articles and reviews, and was an editor of Harrison's Principles of Internal Medicine. He has served on the editorial boards of the New England Journal of Medicine, Annals of Neurology, and Science. He is a member of the Institute of Medicine of the National Academy of Sciences, the American Society for Clinical Investigation, and the Association of American Physicians, and is a fellow of the American Academy of Arts and Sciences. Martin chaired an Institute of Medicine (IOM) Committee that led to the development of the Human Brain Mapping initiative. He is member of the Council of the IOM, as well as a member and past president of the American Neurological Association. Dr. Martin was awarded the AAMC Abraham Flexner Award in 1999.