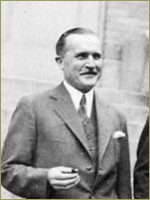 Karl F. Meyer (or "K.F." as he was known to the scientific world) was born in 1884 in Basel, Switzerland. He attended schools in Basel where he received a broad education in the classics and such languages as Greek, Latin, French, English, and his native tongue, German. He attended the University of Basel, and graduated from the University of Zurich where he studied biology and zoology. He was introduced to the field of comparative medicine, then known as veterinary medicine. Meyer, like many young scientists of his day, was inspired by the animal research of scientists such as Pasteur, Koch, and Loeffler. In 1905, Meyer moved to the University of Munich where he studied a number of infectious diseases in the Department of Medicine. He returned to Switzerland to complete the curriculum at the Veterinary School in Bern in 1909. He was strongly encouraged by his teachers to pursue an academic career. To do this, he went to the Veterinary Bacteriological Institute in South Africa to broaden his background in protozoology and epidemiology.

While studying malaria, he contracted the disease and was treated with salvarsan. He returned to Switzerland in 1910 where, during his convalescence, he met the British ambassador to the United States. The ambassador offered to help young Meyer to obtain an appointment at an American university. He contacted the University of Pennsylvania resulting in a teaching position in pathology and bacteriology in the School of Veterinary Medicine. Meyer was well received as the teacher of medical microbiology, and was a full Professor by the age of thirty. His first article on filterable viruses appeared in 1914, marking the beginning of his research on the cause of equine encephalitis. He isolated a virus from a horse dead of encephalitis, but the agent was lost in passage through rabbits. The epizootic was of national concern, but the cause was not to be found until 1930 by Meyer and his associates at the University of California.

Over the next forty years, Meyer became one of the world's most prodigious investigators in animal diseases and public health. In 1915 he joined the faculty being assembled by George H. Whipple at the Hooper Foundation for Medical Research at Parnassus. As one of his first assignments, Meyer was called to work on the problem of typhoid fever. A spaghetti pie served at a church dinner had caused the poisoning of one hundred people. Meyer found that the woman who cooked the pie had given many people typhoid fever in the preceding six years. The experience convinced him of the importance of epidemiology in public health. It also interested him in a study of typhoid carriers. He demonstrated that the phenomenon of typhoid carriers could be recreated by infecting laboratory animals. Meyer organized the Department of Bacteriology at UC, and in the college of Letters and Science at Berkeley, serving as Chairman of both departments until 1948, while also directing the affairs of the Hooper foundation.

When George Whipple left the Hooper Institute in 1921, Meyer took over the directorship and remained in that position until his retirement in 1954. During that time, his important studies and publications reflected his continued interest in filterable viruses, as well as malaria, sporotrichosis, and anthrax. During the influenza pandemic of 1918-1919, he studied the cause of the disease. In 1919, he began his work on botulism that led over the next ten years to the prevention of botulism in canned foods. Meyer's studies on brucellosis in experimental animals continued through the 1930s. He developed the curriculum in public health on the Berkeley campus. The curriculum was essentially the predecessor of the U. C. School of Public Health. His epidemiological studies demonstrated the infectious nature of coccidioidomycosis in California. Later, he investigated psittachosis and the utility of tetracycline in turkey feed. During World War II, his interests turned to plague, yellow fever, and viral hepatitis. He received the Lasker Award in 1951 for his contributions to "two generations of students, over three generations of study." Even after his retirement in 1954 at age seventy, he produced more scientific articles than most scientists do in a lifetime. He died in 1974 at age eighty-nine.

Karl F. Meyer. "Medical Research and Public Health." An Interview conducted by Edna Tartaul Daniel in 1961 and 1962, with recollections by Sanford S. Elberg, Julius Schachter, Lucile E. Foster, James H. Steele. Sponsored by the University of California and The National Library of Medicine.