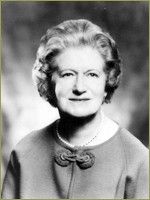 While Dean of the UCSF School of Nursing from 1958-1969, she established the School's Doctor of Nursing Science program, the first in the West, and one of the few in the country at that time. She introduced an innovative undergraduate program leading to a BS degree in Nursing, and an expanded clinical specialty program leading to an MS in Nursing. During her tenure, the School increased in size from an enrollment of 250 to 450, with a faculty that more than doubled, providing graduate education in maternal-child, medical-surgical, psychiatric, and public health nursing. Nahm believed that there is an explicit difference between medicine and nursing and defined professional nursing as an independent practice, in addition to its well-known function related to medicine. To this end, she created the Social and Behavioral Sciences Department, the first basic science department within any school of nursing. According to Dean Nahm, "the primary function of graduate programs is to prepare nurses for leadership positions in nursing education and nursing service and for research." She died in Missouri in 1992 at the age of 90.