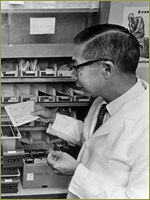 Eric Owyang was a graduate of UC Berkeley and a graduate of the class of 1941 of the UC School of Pharmacy. He continued his career at Parnassus, and by the mid-1960s he was chief pharmacist of the UCSF Hospital.

Eric Owyang was one of the four initial planners of the pathbreaking UCSF clinical pharmacy service. The initial planning meeting took place in 1965 when he and Jere E. Goyan, Sidney Riegelman, and Donald Sorby met to finalize a plan that proposed the establishment and staffing of satellite pharmacies within the UC Hospital. This would eliminate the “error-prone, snail-paced existing system” of nurses acquiring drugs from the central pharmacy. This was a radical departure from traditional pharmacy, for it would give pharmacists access to the “inner circle” where decisions regarding drug therapy were made. The founders felt that these hospital-centered pharmacists would be able to act as drug therapy consultants to physicians.

As respected members of the professional community at UCSF, these four men were able to secure the support of acting Vice-chancellor and surgeon, J. Englebert Dunphy, who proposed that a trial satellite pharmacy be located in his surgical ward on the ninth floor of Moffitt hospital. This became known as the Ninth Floor Pharmaceutical Service Project, which evolved into a 24/7 service staffed by a pharmacist, who would fill drug orders, prepare and standardize admixtures, regulate time schedules, and provide in service information to nursing and medical staff. In addition the pharmacist would organize a “drug history” of each patient and record a complete pharmaceutical service record. When the benefits to patient care became obvious, the program was expanded to include pharmacists on the hospital’s CPR team. By 1968 the program included a drug information and analysis center, which informed hospital personnel and the Pharmacy and Therapeutics Committee.

Eventually Eric Owyang became Clinical Professor and externship coordinator for this highly successful clinical pharmacy program at UCSF. In 1978 he received the Chancellor’s Award For Public Service as well as the Thomas N. Burbridge Award for “his long-standing contribution to the social and educational needs of his community and for his dedication to equal opportunity for students.”

He was active in community affairs, serving as vice chair of the United Way and on the board of the San Francisco Heart Association. In 1978 he received the UC Pharmacy Alumni Award and he was founder and first president of the UCSF Retirees Association. He was made an honorary member of the California Society of Hospital Pharmacists in 1989. He died in 1993 at the age of seventy-five.