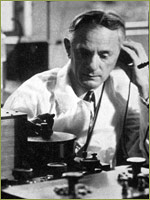 Carl L. A. Schmidt was born March 7, 1885 in South Dakota and his family moved to St. Helena, California when he was still a young child. He graduated from St. Helena High School in 1904 and entered the UC Berkeley College of Chemistry, graduating in 1908 with a B.S. Degree. He showed early promise as a scholar, having published four articles before graduating, and for three years he did postgraduate research work under Professor A. E. Taylor, studying the toxicity of sulfite aluminum and copper in food preservation. In 1912 he studied bacteriology at Berkeley and in 1913 was appointed as City of Berkeley chemist, bacteriologist and food inspector, developing an effective municipal laboratory. In the following year he married Esther May Skolfield, a bacteriologist at the State Board of Health located in Berkeley, and for the next years they worked jointly in bacteriology and immunology. Dr. Schmidt was awarded a research grant from the Hooper Foundation and completed the Ph.D. degree in 1916, working under Dr. F. Gay and T. B. Robertson at Berkeley in the study of the immunological properties of proteins.

In 1918 he was appointed assistant professor in the Department of Biochemistry and Pharmacology, advancing to associate professor in 1921. In 1924 he became Professor and Chairman of the Department of Biochemistry at Berkeley and continued his career, pursuing diverse research interests in immunology, bile and liver function, and the physical chemistry of amino acids and proteins.

In addition to his duties as Professor and Chair of Biochemistry, he divided his time between Berkeley and Parnassus, holding the post of Dean of the College of Pharmacy from 1937-1944. During his time at the College of Pharmacy he recruited many excellent basic scientists and, along with his assistant dean, Troy C. Daniels, developed courses in organic and physical chemistry, physics, plant physiology and other basic sciences. He was a prolific writer and teacher: he edited The Chemistry of the Amino Acids and Proteins (Springfield Ill.: CC Thomas, 1938), co-wrote the textbook, Fundamentals of Biochemistry, published nearly 200 journal articles, and supervised twenty-nine students toward their Ph.D. degrees. He also served as acting dean of the UC Medical School (1938) and on the advisory board of the College of Dentistry.

Dr Schmidt participated in a wide variety of professional activities, inaugurating an annual meeting of biochemists on the Pacific Coast in the 1930s, which eventually came the Pacific Coast Section of the Society for Experimental Biology and Medicine. He served as consulting biochemist for the UC and Southern Pacific Hospitals, Frederick Stearns and Company, and the Western Regional Laboratory of the U.S. Department of Agriculture. He was a member of the American Chemical Society, the American Society for Biological Chemistry, the Western Society of Naturalists, and the California Academy of Medicine, and an honorary member of medical and pharmaceutical fraternities. He died on February 23, 1946, at the age of sixty-one, after twenty-eight years of service at both the Berkeley and San Francisco campuses of the University of California.