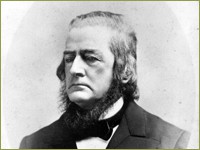 Hugh Huger Toland was born April 16, 1806, the son of a South Carolina planter and banker. At age sixteen he "read" medicine and worked in the local apothecary shop with a town doctor. He entered medical school at Transylvania University at Lexington Kentucky, graduating in 1828, first in a class of 160. Following graduation he became "circuit medical rider" until he could afford to continue his surgical training. In 1832 he traveled to Paris for postgraduate study at the Salpetriere. Oliver Wendell Holmes was among Toland's fellow American physicians studying at the prestigious Paris school. In 1833 Toland returned to Columbia, South Carolina, where he began a highly successful surgical practice, reportedly earning as much as $15,000 per year. The lure of California caught hold of Toland and in 1852, at the age of forty six, he left Independence, Missouri, for California, making the trip in a few months. He set up a quartz mill on a claim at Mokelumne Hill in Calaveras County, but his wife died a few days after their arrival, and after only a few weeks of unsuccessful mining he moved on to the more populous San Francisco to set up a medical practice.

Toland located his office near the waterfront at Montgomery and Merchant Streets and soon became the city's foremost surgeon. He frequently reported on surgical operations in the Pacific Medical and Surgical Journal, revealing a practice that included bone surgery, vesico-vaginal fistula repair, iridectomy for glaucoma, thyroidectomy, and repair of aneurysms. In 1855, he was appointed surgeon to the State Marine Hospital, the predecessor to the City and County Hospital of San Francisco. In 1864, he founded the Toland Medical College, intending that this medical school should "spring into usefulness and become an ornament to the city and an honor to the state." This school was transferred as an unconditional gift to the University of California in 1873, and became the Medical Department of this young institution.

In addition to his activities as surgeon and Professor of Surgery, Toland's interest in pharmacy and his experience in the mother lode added to his thriving medical practice the delivery of packaged medicines to the miners. Toland used the Wells Fargo messengers to carry his advice and medicines up to the mining country. His favorite remedies, labeled "anti-scroft" (iodide of potash) and "anti-syph" (mercury with a dash of lobelia), were used to treat the common problems of tuberculosis and syphilis. Although many writers stress the rowdy, entrepreneurial nature of Toland's mail order business, his work as a serious surgeon and medical educator represents his important contributions to California medicine. He died suddenly of stroke at age 74 while still "hale and systematic" and active in his Montgomery Street practice.