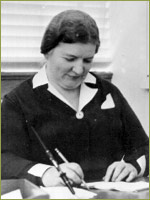 Margaret Anthony Tracy was born in Danville, Kentucky in 1893, the daughter of Irish and English immigrants. She earned an A.B. degree with majors in mathematics and education from the University of Cincinnati in 1915, and her nursing training began in 1918 at the Army School of Nursing, where she obtained a diploma in 1920. After the First World War, she worked at the archetypal Henry Street Settlement Visiting Nurse Service of New York City, holding positions as staff and supervising Public Health Nurse. Later, she became director of a School of Nursing in Glens Falls, New York, and then in 1925 was recruited as Surgical Supervisor at New Haven Hospital for the new School of Nursing at Yale University. While at Yale, she completed time-study research in surgical nursing procedures and was promoted to Assistant Professor and Assistant Superintendent of Nursing. In 1929 she earned the M.S. degree in bacteriology, pathology and public health, from Yale University.

In 1934, after a national search, Margaret Tracy was recruited to the University of California Training School for Nurses and within a short time held multiple positions as director of the training school, superintendent of the UC Hospital nursing service, and administrator of the Division of Nursing Education at Berkeley. Well known for her stubborn advocacy of improved education for professional nursing, she consistently supported advanced educational opportunities for her faculty. Colleagues credit her with “Not deviat[ing] one whit from her abiding purpose to establish a school of nursing which should be worthy of a place in an institution of higher learning, and thus…rais[ing] the level of education for professional nursing.” In 1939, with the support of University President Robert Sproul, UC Hospital superintendent Stanley Durie, and other sympathetic faculty from both the Berkeley and Parnassus campus, the UC nursing program was formally designated a “school” Full academic status for the nursing faculty took several more years to accomplish and throughout this period Miss Tracy encouraged the faculty to pursue higher academic degrees and worked for their promotion and status as full academic professionals.

As director of the Training School and, later, dean of the School of Nursing, she closely guided the learning experience of her students, emphasizing self-government, and organizing the nursing service to meet the needs of patients, while also making sure that students received adequate clinical instruction. Her textbook, Nursing: An Art and a Science was first published in 1938, went through numerous revisions, and became an important contribution to nursing education. She was active at professional meetings, and served on the editorial board of the journal Nursing Research. During World War II, she served as a member of the national Nursing Educational Advisory Committee of the U. S. Public Health Service and helped organize the Nurse Cadet Corps to promote training of nurses to meet the needs of wartime. She also directed a branch of the Cadet Corps on the Parnassus Campus. Despite failing health, she continued to lead the School of Nursing throughout the postwar years, persistently expanding the nursing curriculum and fostering faculty development. She retired in 1956 as Dean Emeritus and Associate Professor Emeritus of the first autonomous school of nursing in a state university.