"...This is the University of California. It is not the University of Berlin or of New Haven which we are to copy; it is not the University of Oakland or of San Francisco which we are to create, but it is the university of this state. It must be adapted to this people, to their public and private schools, to their peculiar geographical position, the requirements of their new society and their undeveloped resources....It is 'of the people and for the people,' not in any low or unworthy sense, but in the highest and noblest relations to their intellectual and moral well-being."
Inaugural Address of President Daniel Coit Gilman, November 7, 1872

Plans for a public university were developed at the first Constitutional Convention in 1849, when the Gold Rush was well underway. When California became a state in 1850, however, public funds were not available for a state university, and in its place several private schools and academies were founded. In 1853 a group of missionaries sent west by the American Home Missionary Society of New York founded Contra Costa Academy in Oakland, and in 1855 it was transferred to the state and incorporated as the College of California. Congressional action in 1853 and the Morrill Act of 1862 brought gifts of public lands for colleges of agriculture and the mechanical arts, and California responded by establishing an Agricultural Mining and Mechanical Arts College in 1866. On March 23, 1868, Governor H. H. Haight signed a new act creating the University of California out of the combined resources of the College of California and the Agricultural College. 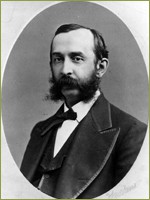 Daniel Coit Gilman, President of UC from 1872-1875.
The new university opened on the Oakland campus in 1869 with ten faculty members and forty students, but classes were not held on the Berkeley campus until four years later. In 1872 the Regents successfully recruited Daniel Coit Gilman of Yale to be the University's second president. A creative educator who believed firmly in the importance of science and engineering education, Gilman secured funding for classroom buildings on the Berkeley campus, collected books for the library, and brought several important private gifts to the University.

The young university that Gilman arrived to lead was, in 1872, still based in Oakland, and the institution was in the midst of strident debate among supporters of literary, agriculture, and scientific factions over proper priorities in instruction. This was the tumultuous context in which Hugh Toland was persuaded to deed the assets and buildings of Toland College to the state university. Acquisition of Toland Medical College was not an entirely smooth process, and the regents balked when Hugh Toland demanded that the school be named after him. This show of egotism, along with faculty squabbles among colleagues on the faculty of the rival Cooper Medical College, caused further delays. The controversy was finally settled through the combined efforts of Dr. R. Beverly Cole and President Gilman. In 1873 Dr. Toland accepted the professorship of clinical surgery and the Toland Medical College became the Medical Department of the University of California.

As a trustee of the Sheffield Scientific School at Yale, Daniel C. Gilman was anxious to see the merger with the Toland medical school. Moreover, adding graduate medical education, the University would follow a course mandated by the Organic Act of 1868 that created the University. He was determined to provide adequate scientific instruction and research as preparation for medical study, envisioning courses that would "train the eye, the hand and the brain for the later study of medicine." In a series of speeches in 1873 President Gilman spoke to Californians "On Medical Education in the State University," urging his listeners to regard practitioners "as something more than dispensers of medicines and students of disease. They are students of life or life in the largest scope of its relations." Speaking to an audience of California physicians, he defined the proper attributes of a good university medical school, including admission of women, and proper premedical preparation involving language training in German and French "to keep abreast of the progress of discovery in Berlin, Vienna, and Paris." His most important prescription for medical education was incorporation of science into the curriculum, to train physicians in the "habits of observation, manipulation, and reasoning." When the medical school opened as a university affiliate in July of 1873 the merger was directly informed by Gilman's vision for an academic medical school. Gilman resigned from the University of California in March 1875 to take on the presidency of the newly established Johns Hopkins University in Baltimore. The ideals he formulated in 1873 in California foreshadowed his role as visionary leader in the creation, twenty years later, of the Johns Hopkins Medical School.

Bibliographical Note:
Gilman's important role in defining American higher education during its crucial decades of reform in the late nineteenth century is treated in Abraham Flexner's 1946 biography of Gilman. Written just after the Second World War when the nation was facing the problem of reorganizing America's universities, Flexner's book points out that "the outlines of the Johns Hopkins can...be discerned in much what he [Gilman] initiated at Berkeley." This theme is pursued in Gert Brieger's article cited below.

Gilman, Daniel Coit. "On Medical Education in the State University," Transactions of the Medical Society of the State of California, Sacramento: T. A. Springer, State Printer, 1873.