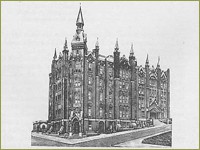 Cooper Medical College, ca. 1880
Elias Samuel Cooper, a surgeon from Illinois, sailed to San Francisco in 1855. He soon was active in organizing a state medical society, and in 1858 started the first medical school in the West. The faculty consisted of four doctors and one lawyer, Cooper being Professor of Anatomy and Surgery. R. Beverly Cole was Professor of Obstetrics and Diseases of Women and Children, as well as Physiology. Cole was also dean of the new school. Lacking a charter, the school derived its right to issue diplomas from the University of the Pacific, a Methodist institution in nearby Santa Clara, and was named the Medical Department of the University of Pacific. The first course of instruction was offered in 1859 and consisted of five months of lectures, repeated in the second year. The fee of each professor was $20 payable in advance, matriculation fee of $5 paid but once, with a graduation fee of $50. In 1859, Cooper's nephew, Dr. Levi Cooper Lane, joined the faculty as Professor of Physiology. The school graduated two students that year, and one the following year. Dr. Cooper died at age 40 in 1862. 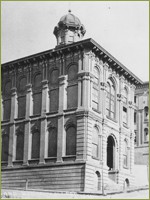 Toland Medical College, ca. 1864
In 1864, Hugh Huger Toland founded a new medical school in San Francisco. His personal wealth was reflected in the handsome building he constructed. The Toland Medical College was launched with great fanfare while the old school, lacking Cooper's stimulating spirit, was seriously overshadowed. The Pacific school ceased its activities and all the students entered the Toland school. The students petitioned Toland to invite Drs. L. C. Lane and Henry Gibbons to join the faculty. Lane was appointed Professor of Physiology and Gibbons Professor of Medicine.

When in 1870 Levi Cooper Lane and Henry Gibbons resigned from the faculty of the Toland Medical College to restart the former Pacific Medical School, Beverly Cole remained with the Toland school where he later served as dean. This incident was the beginning of a long and sometimes bitter rivalry between the two schools. Lane never forgave Cole, and Cole never regretted his decision to align himself with Toland. In 1873, in the editorials of the Western Lancet, Cole often exhibited patronizing and virtuous airs toward the Pacific School. The intense feeling of competition between Lane and Cole in large part explains the distance between the two schools and their faculties. One of the delights of Beverly Cole's declining years was to look out from the UC Medical Building on Parnassus Heights, and observe that the threshold of his door was higher than the roof of Lane's school, as he could see it from across the city.

The Toland school soon affiliated with the University of California. The Lane and Gibbons school remained independent, giving degrees through an arrangement with University College, a Presbyterian school in San Francisco. In 1882 it became the Cooper Medical College, named after Lane's revered uncle. Lane built and gave to the college two major buildings and erected Lane Hospital in 1894. His generosity, in many respects, kept the Cooper Medical College competitive with the Medical Department of the University of California. By the turn of the century, both medical schools were growing in very independent ways. Cooper Medical College was not acquired by Stanford University until after Lane's death in 1902.

In 1906, David Starr Jordan, President of Stanford University, proposed to University of California President Benjamin I. Wheeler that the two universities, while each giving preliminary medical courses on its own campus, unite for clinical instruction and research in San Francisco. The idea would be pursued in Dr. Abraham Flexner's 1910 report on medical education in the United States and Canada, a study carried out under the direction of the Carnegie Foundation for the Advancement of Teaching. The curse of medicine, Flexner declared, was the number of medical schools. One medical school, the report held, was sufficient for the state of California, and the entrance of Stanford into the field was strongly deprecated: "There is no need of it from the standpoint of the public; it must, if adequately developed, become a serious burden upon the finances of Stanford University. The question arises whether Stanford could not do well to content itself with the work of the first two years at Palo Alto and to co-operate with the State University in all that pertains to the clinical end."

Presidents Wheeler and Jordan met with two regents of the University of California and two Stanford trustees in 1911. The meeting went well beyond the subject of shared clinical programs. The participants discussed the outright merger of the two medical schools. The Stanford Board of Trustees saw little merit in the idea and decided to continue with their own medical school. Despite serious financial difficulties, Stanford continued to support its medical school, proposing to renovate Lane hospital, to add a substantial wing for private patients, and to erect a new women's hospital.

Then, in 1913, things changed abruptly as John C. Branner assumed the presidency of Stanford University. An outspoken critic of the acquisition of the Cooper Medical College in the first place, Branner wrote to the President of the Carnegie Foundation in 1913 looking for encouragement to abandon the medical school. On December 20, 1913, the Stanford Board of Trustees appeared to agree with Branner and recommended "That the entire equipment be turned over to the University of California upon such terms as the Trustees may be able to arrange with the Regents of the University of California."

The Stanford Trustees appointed a special committee to confer with a similar committee of the Regents and agreed that the two medical deans arrive at a possible basis of union. They accepted Branner's recommendation to bring Henry S. Pritchett, President of the Carnegie Foundation, and Professor Welch of the Johns Hopkins Medical School to the coast for a survey of the situation and to confer with Trustees and Regents.

Then, in a stunning reversal, the Trustees on February 27, 1914, accused President Branner of acting in haste, and

"Resolved, (1) That in its opinion the financial condition of Stanford University does not now require, and may never require, such drastic action as the abandonment of medical education; and that for the abandonment of any important department the dignity and reputation of the University demand much longer preparation and notice than one semester.

When Carnegie's President Pritchett arrived in March he found the Stanford Trustees' Committee unwilling to accept his proposals. Other outside experts summoned by Pritchett met with the same response. In April 1914, Herbert C. Moffitt, Dean of the UC Medical School, submitted to Stanford's Dean Ray Lyman Wilbur a statement of the minimum terms on which a union might be brought about. These required, among other things, that the united schools be controlled by a board consisting of five California Regents and three Stanford Trustees. The unequal terms of the proposed union, in part, reflected the Regents' confidence that the successful fundraising for the new UC Hospital on Parnassus Heights, the large gift to the University of California from E. V. Cowell, and the formation of the Hooper Foundation put the university in a very strong position.

Not surprisingly, the Stanford Trustees voted that the trusts under which they were administering did not permit their turning over either property or income to any institution in which they did not have at least an equal vote, and went on to say that it would be "impossible to formulate any plan for the union of the two medical schools on any other basis."

Pritchett prevailed on UC President Wheeler to be "very generous in order to bring about this result." On May 12, 1914, the Board of Regents" after careful consideration of all that has hitherto transpired, voted to express officially to the Stanford Trustees their deep desire that an amalgamation be consummated of the work in medicine of the two schools. They are convinced that the welfare of medical education will be so much advanced by such a merger that the opportunity of a united effort in this field by the two universities ought not to be lost. The Regents, therefore, in earnest hope of the realization of a plan of so much moment to the community, would request your Board to suggest a basis on which, in your opinion, such a merger in medical education may be brought about."

The Stanford Trustees' rejection of this final attempt was particularly disappointing to President Wheeler. The Regents wrote to President Pritchett expressing their deepest regret. In an exchange of letters with Stanford's President Jordan, Pritchett denounced the "continuance of the old time medical rivalry between the two universities" as unworthy of both institutions, and again stated his strong opinion that San Francisco did not need two medical schools. Jordan responded, citing "The fact that a definite proposition had been presented by the University of California, which practically was an ultimatum that a union was possible only upon a basis in which the control of the united schools was in the hands of that institution. This was the great and insurmountable obstacle to any form of union." Jordan ended his letter and the entire affair with words of caution still heard today, "Two good schools under present conditions are much more influential than a single school would be, and a bit of friendly rivalry means better support from the State. There is no point in trying to force a new adjustment until it comes naturally and with unanimity of feeling."