California Pharmaceutical Society
“The practice of medicine and pharmacy should go hand in hand and the more we endeavor to increase our individual knowledge and practical skill, so much more we confer dignity upon our own and a sense of security to the sister profession. The time has gone by when the educated and skillful pharmacist can be considered in the derogatory light of ‘cook to the Doctor’. We are what our efforts make us; and as surely as water finds its level, so surely will the labors of the conscientious receive, in due time, their appointed reward.”
1870 minutes of the California Pharmaceutical Society.
In autumn of 1868, just four years after the foundation of Toland Medical College, an activist group of seventeen city pharmacists organized the California Pharmaceutical Society. The stated goal of the new association was “the advancement of pharmaceutical knowledge and the elevation of the professional character of apothecaries throughout the state of California.” Regular monthly meetings of the Society continued, attracting a growing number of participating pharmacists, who presented papers on such subjects as, “Drug and Poison Bills,” “State and Preparation for Commerce of the Crude and Refined Chemical products of California,” Characteristic Botany of California,” “California Wines, Brandies, etc”, and “Fluid Extracts vs. Tinctures.” Proceedings of the young Society reveal their concerns with “dispensing medicines of less than standard value”, “indiscriminant” sale of poisons, introducing new formulas to the pharmacopeia, and “assimilating” the decimal system. Typical of the founding members of the Pharmaceutical Society were two enterprising individuals who devoted their time to pharmaceutical education and professional standards while managing multiple city pharmacies. 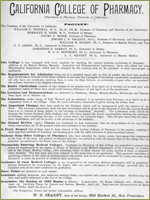 By the 1890s, the California College of Pharmacy featured laboratory and microscopical instruction as well as lecture courses.
In 1871 the Pharmaceutical Society drafted a bill “to regulate the practice of pharmacy in the City and County of San Francisco” which passed the legislature in 1872, and a Board of Pharmacy was appointed to administer the new law. This regulation predated the Medical Practice Act by five years, and the records of the California Pharmaceutical Society reveal a striking degree of unanimity among pharmacists of San Francisco. Minutes of the first annual meeting recorded 99 members and stated that “only three or four of the apothecaries of San Francisco have chosen to keep beyond the pale of our regulations.” Their new constitution stated explicit goals: “ to improve the science and art of Pharmacy, by diffusing knowledge among Apothecaries and druggists, fostering pharmaceutical literature, developing talent, stimulating discovery and invention… establish[ing] the relations between druggists, Pharmaceutists, Physicians and the people at large, upon just principles, which shall promote the public welfare and tend to mutual advantage.” By late 1871 the California Pharmaceutical Society incorporated and, in 1872, established the California College of Pharmacy, one of ten such colleges in the United States, and the first in the West. The first faculty included two pharmacists with medical degrees out of four members who taught courses in chemistry, pharmacy, materia medica, and botany.

The new pharmacy college had barely begun its first series of lectures when affiliating with the new state University was proposed, a move wholly supported by UC President Danel Coit Gilman, whose support for science education in the young university set an important precedent. Agreement was reached with the Regents and by June 1873 the Pharmacy Department was formally affiliated with the University. Just three months earlier President Gilman had negotiated the conveyance of Toland’s medical college to the university. UC now had its first two professional “affiliated colleges.”