Debates over Medical Education
In the postwar years, as the nursing school flourished and strengthened its ties with Berkeley academics, university and medical school officials again turned their attention to the problem of the split medical school. Their interest was prompted by rumors that the General Education Board, an organization backed by Rockefeller philanthropy and committed to rebuilding American medical education, wished to endow a school of public hygiene at Berkeley, on par with those already created and endowed at Johns Hopkins and Harvard. As part of this plan, they indicated that they would financially assist the UC Medical School in upgrading instruction and reconsolidation. The main requirement of the Rockefeller donors, however, was that the UC Medical School be relocated at Berkeley in close proximity to established academic programs in anatomy, bacteriology, immunology, and biochemistry. 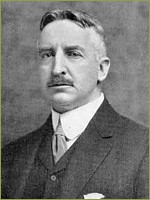 David P. Barrows
In 1920, University President David P. Barrows, who was anxious to meet the criteria for this potential multi-million dollar donation, traveled east to speak with the Rockefeller board members in person. In consultation with Abraham Flexner himself, President Barrows was succinctly reminded of the current reforms deemed necessary in medical education. This was a time in American medicine when substandard schools identified in the Flexner report were rapidly being closed and the remaining institutions were realigning themselves according to Flexner's blueprint for reform. The UC Medical School's plight was not unique--the report indicated that of twenty-five top university-affiliated institutions, five (Rush Medical College, California, Nebraska, Kansas, and Stanford) had similarly separated instructional programs. Flexnerian reforms mandated the implementation of salaried full-time positions for both scientists and clinicians, consolidation of science and clinical instruction in one geographical location near a major university, and designation of a large teaching hospital completely dedicated to clinical training. In response to these requirements, President Barrows drafted a plan for bringing full-time "vocational" professors to the medical school, consolidation of instruction in one place, and reconfiguration and expansion of the UC Hospital teaching bed capacity along with plans for a school of public health. He then asked the Regents to develop a budget corresponding to these reforms, hoping that in so doing he would secure "the generous participation" of the General Education Board. 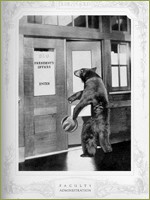 Page from The Blue and Gold in the 1920s showing University President Barrow's office
As he managed these negotiations, President Barrows was well aware of the local political obstacles to relocating the school at Berkeley. By the early 1920s there were substantial reasons for keeping the medical school in San Francisco, especially in terms of the city's potential as an inexhaustible source of talented practitioners and patients. Moreover, the medical school's major endowments of the late nineteenth and early twentieth centuries dictated a commitment to the Parnassus site. Sutro's donation of land for the Affiliated Colleges in 1895 was contingent on the use of the site expressly for professional medical education, and the Hooper Foundation specified that Hooper-funded research be conducted in San Francisco. Then in 1917, the new UC Hospital was built with $750,000 of private subscriptions from a supportive San Francisco community. President Barrows hoped that the Regents might solve the problem and bend to the wishes of the General Education Board, or conversely, that the General Education Board might be flexible on the issue of the school's actual location.

On March 12, 1921, in a move reflecting local politics and the lobbying influence of San Francisco clinicians, the UC Regents voted to reaffirm their 1912 decision, stating flatly that "as a prudential measure. . . . it shall be the policy of the Board to consolidate the medical department in San Francisco." That summer the General Education Board received the UC proposal for consolidation at San Francisco and never replied. It was clear that consolidation of the medical school would have to take place at the university campus in Berkeley in order to satisfy the terms of a Rockefeller endowment.

This was a major loss for California higher education: Rockefeller money was transforming the national landscape of medical education in the interwar years and would eventually provide over $50 million to sixteen medical schools. Philanthropy came from other sources as well. Between 1910 and 1932 foundations would pour a total of $150 million into the reform of American medical education. The Regents' stubborn adherence to the San Francisco location prevented UC School of Medicine from obtaining national philanthropic financial support during this time of flush private endowments. 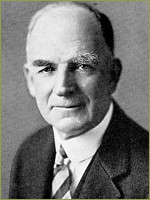 William W. Campbell
The matter of the Rockefeller endowment surfaced again in 1923, when the incumbent UC president, astronomer William W. Campbell, made a last forceful attempt to resolve the medical school situation, which he regarded as "the University's largest and most difficult problem." Like Barrows before him, President Campbell traveled east to confer directly with Abraham Flexner and the Rockefeller board, and discovered that, although the donors' offer of endowing a school of public health at Berkeley was still on the table, they would not assist the medical school if it remained in San Francisco. On the other hand, if the Medical Department was consolidated at Berkeley it was clear that the Rockefeller interests would be "instantly and tremendously interested in its financial problems." President Campbell delivered an ultimatum to the regents in 1924, arguing that "the Berkeley location of the medical school would tend to make it a statewide institution, in greater degree than it is today, and it would bring many millions of help from outside the State." He emphatically pointed out that "if the location is to remain in San Francisco, then I respectfully represent, the regents should be prepared to find in San Francisco or elsewhere, very soon, many millions of dollars for the consolidation expansion and maintenance of the Medical School and Hospitals."

Once again, the Regents stood firm for the Parnassus location, sealing the fate of the UC Medical School for the next three decades. Despite their stubborn rejection of an all-Berkeley medical campus, the Regents did respond to President Campbell's call for dramatic reform at the medical school and joined him in mobilizing state resources to accomplish the task.