CHRONOLOGY OF THE SPLIT CAMPUS, 1906-1958 by Nancy Rockafellar

The Split Occurs
1906: Due to earthquake and fire the two preclinical years of the curriculum (basic science departments of anatomy, pathology and physiology) were moved to Berkeley. Clinical instruction at Parnassus was enhanced by turning the classrooms of the medical school building into a complete 75-bed teaching hospital.

December 22, 1911: Dean D'Ancona recommended reconsolidation of the various departments and placing the clinical years "on an academic basis." He reported faculty sentiment that the split campus was "a serious mistake."

1912: By this time full-time positions in Anatomy, Physiology, Bacteriology, and Biochemistry had been created at Berkeley. On the clinical side at Parnassus, full-time clinical chairmanships were created in 1912 for Obstetrics and Gynecology, and in 1913 for Pediatrics.

April 9, 1912: The Regents voted "that it shall be the policy of the Board to consolidate the Medical Department in San Francisco."

May 13, 1913: The Regents accepted a gift of 4,330 acres of redwood timberland to be used for "foundation and endowment of a School of Medical Research to be known as the George Williams Hooper Foundation, which shall be conducted and maintained in San Francisco as a department of the University of California." The Hooper became the main site of focused research in San Francisco.

January 11, 1916: After a prolonged study of medical schools throughout the nation, Herbert C. Moffitt presented a plan to the Regents recommending specific plans for relocating anatomy, physiology, and biochemistry at Parnassus.

1917: The University Hospital building at 533 Parnassus was completed with the aid of $600,000 in donations from San Francisco citizens.

The Quest for Rockefeller Endowment 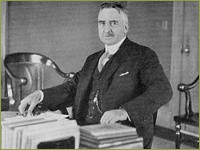 David P. Barrows
September 14, 1920: After consultation with the Rockefeller interests, President Barrows presented a report to the Regents recommending that the school add a large science building with research laboratories; create full-time professorships in medicine and surgery; and reorganize the medical school and UC hospital by separating their budgets and expanding teaching bed capacity. He also urged that UC expand the student body by sixty to one hundred students and choose the best site for the location of the medical school. He admitted that "it may be that commitments have already been entered into of such a character as to make the location of the medical school at Berkeley impossible."

March 12, 1921: The UC Regents consider Barrows' proposal, but the political persuasion of the San Francisco clinicians who were involved in the day to day teaching at the school prompted the Regents to decide to reaffirm their 1912 decision that the school should remain in San Francisco. The clinicians' influence is invisible, but strong -- many of the Regents and state legislators have UC faculty physicians as their personal doctors.

1921: President Barrow reports the Regents' decision to the General Education Board which tables the matter of funding for the UC School of Medicine. 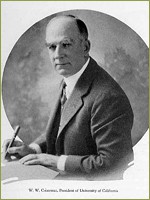 William W. Campbell
February 26, 1924: A new university President, astronomer William W. Campbell defines the medical school matter as "the University's largest and most difficult problem." Campbell presents a new plan to the Regents based upon a doubling of the class size to one hundred students per class. He comments on the high cost of educating medical students and writes emphatically to the Regents, stating that "no matter where our medical school may be situated, the time has come to make enormously increased financial provision for its adequate development and support....If the location is to remain in San Francisco, then, I respectfully represent, the Regents should be prepared to find in San Francisco, or elsewhere very soon, many millions of dollars for the consolidation, expansion and maintenance of the Medical School and hospitals."

December 13, 1927: Recognizing the futility of trying to persuade the Regents or to please the General Education Board, President Campbell presented a plan to the UC Regents proposing that Langley Porter be brought out of retirement to serve as Dean of the Medical School and coordinate a reform program. Campbell again urges that the basic sciences should be consolidated at San Francisco as soon as "space to accommodate them on Parnassus Heights will become available."

As of 1924, Dr. K. F. Meyer assumed the chairmanship of the Department of Bacteriology and Immunology, and supervised activities in the Berkeley-based department while serving as Director of the Hooper at Parnassus. J. M. S. Olmsted, a Harvard educated neurophysiologist, was appointed professor and chair of Physiology at Berkeley. I. L. Chaikoff joined the department in 1930 and pioneered the use of radioisotopes in the study of intermediary metabolism.

Jan 17, 1928: The Regents approved the transfer of the second-year "clinical sciences" of Bacteriology and Pharmacology to Parnassus Heights.

July 1, 1930 The Regents appointed Professor Herbert M. Evans of the Department of Anatomy in Berkeley to direct the Institute of Experimental Biology.

1931: John B. de C.M. Saunders is hired to teach anatomy on the Berkeley campus.

1934: Construction of the Clinics Building relieved some pressure at Parnassus and facilities in the old medical school building provided some space for the teaching of bacteriology, clinical pathology and pharmacology.

1937: John Saunders, who divided his time between the two campuses, was made chair of Anatomy.

1944: A dual campus Faculty committee consisting of LeRoy H. Briggs (Clinical faculty from SF), J. M. D. Olmsted, (UCB physiology), John Saunders (Berkeley and SF anatomy) and C. L. A. Schmidt (UCB biochemistry) Meyer H. Soley (SF Clinician), and K. F. Meyer, (Director of the Hooper Foundation at SF) reaffirmed the principle of Unification stating that SF had become the site of consolidation "by force of circumstances." They recommend that UC build with state funds, a science building on the SF campus to provide offices lecture rooms, student labs, animal quarters, and research labs not only for basic sciences, but for all departments of Medicine. They note in their report that problems of research require the facilities of several departments, recognizing the importance of collaboration across departments and disciplines.

1945 and 1946: The state legislature responds to faculty appeals by allocating additional funds for building the new teaching hospital and a medical sciences building devoted to teaching and research. (Senate and Assembly Bills No. S.B. 37 and A. B. 61).

Postwar Conflicts
January 20, 1947: A "proposed memorial to the regents" was introduced at the Berkeley Academic Senate meeting, requesting consolidation on the Berkeley campus. Members of the Northern Section of the Academic Senate argued that "sound medical practice rests not upon the old pharmacopoeia, but upon the relatively new knowledge gained in laboratories of physiology biochemistry, bacteriology, psychology, chemistry and physics; discoveries which have given to medicine sulfa drugs, penicillin, streptomycin, vitamins, hormones, anesthetics, radioactive elements and X-rays. This stream of discovery will continue to flow, wherefore medical education, to be most effective must be kept in the closest possible touch with the scientific and humanistic activities of a great University."

February 14, 1947: Medical School faculty met to consider the proposed Academic Senate memorial and voted by acclamation to reject the memorial. According to observers, the faculty ridiculed "the general advantage of easy contact of workers in a concentration of sciences, [it] was dismissed with a joke depicting Berkeley scientist of the Life Sciences Building as 'running from floor to floor exuding knowledge in a continuous intercourse of ideas.'"

May 1947: A more dignified official faculty response to the Proposed Memorial stated that, "The legislature has been generous. Certainly the funds were allocated with the implicit understanding that the Medical center would be developed in SF. We certainly would hesitate to jeopardize in any way this opportunity for realization of the great center of medical education, research and service, which several generations of our faculty have earnestly sought. Continuing controversy does, we believe, jeopardize our great opportunity. In the absence of impelling reasons for a change in policy, the majority of us feel that the implied commitments for location of the medical center in San Francisco should be accepted and its development pursued with vigor."

May 1947: Herbert Evans filed a Minority Report complaining that educational policy was being neglected and urging that an outside commission of researchers, clinicians, and medical administrators be appointed to settle "this whole vexed issue." He wrote privately that the San Francisco location would result in "serious consequences. " He referred to the Parnassus campus as "The bleak fog-ridden hillside called Parnassus Heights, given us some years ago by Adolf Sutro, [which] is constituted by a narrow shelf of land against a considerable eucalyptus forest. On this shelf and the territory across the street from it has been erected and will be erected, razed and re-erected a motley incoherent group of structures. in order to preserve the investment of a few paltry million dollars in what has already lamentably been erected there, our Regents have committed themselves to the permanency of this location and to the permanent intellectual injury of medicine in the state through all futurity, for brilliant medical youngsters will be forever deprived of the support of the other great theoretic scientific, as would not be the case were medicine at Berkeley."

Preparations for Reunification
1947:The Regents stand firm and again restate their commitment to the San Francisco site for the UC Medical School.

1948: A Virus Laboratory was established at UC Berkeley by the Regents to conduct research on animal, bacterial, and plant viruses. Also, in anticipation of the splitting off of medical courses, the Berkeley department of Biochemistry was reorganized in the college of Letters and Sciences under the chairmanship of Wendell Stanley. In 1952 this department moved into the Biochemistry and Virus Laboratory.

1953: In preparation for move from Berkeley to Parnassus, physiologists Francis Ganong and Ralph Kellogg were recruited from Harvard to the Physiology department at UCB with the express understanding that they would help build a new department at the Medical School at Parnassus. In 1953, this planning period began, and under the direction of Leslie Bennett they bought equipment and planned space for dual purpose teaching and research labs. Similar preparations were made in the Berkeley departments of Biochemistry and Anatomy. Once the move was accomplished, the Berkeley departments of Anatomy and Physiology were merged into one academic department, and Biochemistry at Berkeley focused on bacterial and agricultural biochemistry and developed in association with the Virus Laboratory.

March 20, 1953: The University of California released plans for the new Medical center in San Francisco.

March 18, 1955: Opening ceremonies were held to dedicate the University of California Medical Center's fifteen story 485-bed hospital and the Medical Science building. Newspaper accounts noted that the buildings were constructed to "withstand an unusual amount of blast and shock, [and] may be able to operate through an atomic attack."

1958: The basic sciences, Biochemistry, Physiology, and Anatomy return to the Parnassus Campus.

Brieger, Gert H., and M. Rita Carroll. "Make No Mistake of It: A Survey of that Recurring Question..." Alumni Faculty Association Bulletin 30 (Summer/Fall 1986):2-9.