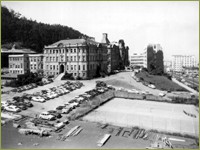 Looking west down Parnassus Avenue in the 1940s.
With the end of the war, as the Medical School obtained research funding from a variety of sources and the faculty became more involved in bona fide research efforts at Parnassus, the decades-old controversy over the proper site for consolidating all four years of medical instruction reemerged.

In 1944 the San Francisco faculty formed a Committee on Unification and Consolidation of the Medical School and submitted a detailed report on the history of the reconsolidation issue. Citing the Regents' repeated decisions to reunify the school "as rapidly as space to accommodate them on Parnassus Heights" could be developed, the committee concluded that despite several exploratory reports and policies, there had been a "dissipation of effort" due primarily to "financial stringency." In a positive reaffirmation of the principle of unification they argued that scientific departments must be more closely associated with clinical departments to create "biological inspiration." They cited the need for complete revision of the medical curriculum into a "coordinated and progressive course" and argued for group investigation in research problems, using the "facilities of several departments." To make this possible in the immediate postwar years, the committee proposed, in addition to building the new teaching hospital, that the state provide funds to construct a science building to provide lecture rooms, student laboratories, animal quarters, and research laboratories. In 1946 the Governor and legislature responded by allocating additional funds guarantee completion of an adequate 450-bed teaching hospital and then appropriated an additional $4 million for construction of a Medical Science Building. 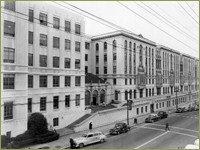 A few months after this commitment to the Parnassus campus was announced, the Academic Senate of the Berkeley-based northern section of the University proposed that the Medical School be moved to Berkeley.

The San Francisco faculty jumped into the controversy, rejecting the Academic Senate proposal by acclamation and arguing that the teaching program that utilized seven San Francisco hospitals could not be duplicated in the East Bay. Herbert Evans, a confirmed member of the Berkeley faculty, warned that the Regents' repeated decisions in favor of the Parnassus campus, which he called "a bleak, fog ridden hillside," would cause "permanent intellectual injury of medicine in the state through all futurity."

Nursing’s Postwar Struggle for Academic Parity
Since the UC hospital was founded at Parnassus in 1907 nursing education had gained the staunch support of  a variety of key individuals who argued for equal academic status for nurses. These included a succession of hospital supervisors and directors, medical school deans, Berkeley faculty and the dean of women, as well as highly placed members of the University of California Administration. However, some influential officials were opposed to the rapid academic advancement of nursing, preferring a “trained” nurse to a “professional” one. Among those were Berkeley Academic Senate members representing the more “mature disciplines” who were unwilling to broaden the definition of scholarly work. Allied with them was an influential minority of medical school physicians who argued outspokenly for limiting nursing students’ education to practical “training” and keeping nursing subordinate to medicine.

In 1939 by the Regent’s authority, the UC Training School at Parnassus had officially become the UC School of Nursing, and, since that formal announcement, the school’s publications described it as “the first autonomous school of nursing in a state university.” Although the School’s director, later Dean, Margaret Tracy reported directly to UC President Robert Sproul, true autonomy in the form of equivalent academic status and a faculty voice in the Academic Senate was a contested issue that persisted for another two decades. In 1944, in the midst of her crucial service as head of the Wartime Nurse Cadet corps, President Sproul conferred the official title of Dean of the School of Nursing to Margaret Tracy. 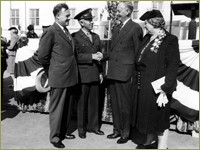 Dedication ceremony for cadet nurses' dormitory, R.G. Sproul and Margaret Tracy
Unfortunately, during the war years and after, the Academic Senate had stubbornly refused to promote Tracy from assistant to associate professor, attempting instead to strip her of her title as assistant professor. When Margaret Tracy’s promotion was repeatedly turned down by the Academic Senate, the future status of the nursing school itself was threatened. Proposals to place nursing faculty in the specialist or clinical professor series were made, but they unanimously rejected these alternatives, correctly fearing that any lessened academic status would fatally compromise the future of the School. Future recruitment was at stake, along with the nurses’ time to do the kind of research that would lead to acceptance as a true academic unit of the university.

In early 1948, in a stunning move to find a solution to the impasse, Margaret Tracy convened her faculty, secured their agreement, and requested that President Sproul put a hold on appointments and promotions in the school for at least two years, allowing the entire faculty to devote its time and energy to earning higher academic degrees. President Sproul welcomed this compromise, and in a remarkable show of diligence, the faculty “went to school” for the next five years, collectively earning six doctorates and seven masters degrees. In a parallel move, beginning in 1949, nursing faculty were removed from supervisory and service roles in connection with the hospital, to allow them more time for creative research, with the support of the hospital administrator Stanley Durie. In a sense, Edith Bryan’s prophetic statement on the importance of nursing research, made twenty years earlier, had now come to pass.

“If we are to develop the science of nursing to its greatest achievement, we must accord the scientific research worker in nursing a position of increasing dignity, honor and power in the profession.”
Edith Bryan, “Methods of Research and Study,” paper presented at NLNE, 1932.

A perceptive Margaret Tracy acknowledged that, although the University of California was holding her faculty to a higher standard than any other university, ultimately the UC School of Nursing “would be stronger for it.” The Academic Senate’s demands for constant redefinition and goal-setting for the School of Nursing during the 1950s led to a series of reports on curriculum and mission that ultimately prompted productive curriculum reform and expansion. In 1947 the director of nursing at the Langley Porter Clinic developed an advanced psychiatric nursing program with funding from the U.S. Public Service and the National Mental Health Act of 1946. Also during this time, Mildred Newton developed and negotiated acceptance of a Masters Degree program that would satisfy the requirements of the University’s Graduate Council.

Throughout the 1950s, as they completed academic degrees and planned for their move into new facilities at Parnassus, the nursing faculty joined together to preserve their gains. In 1951, Margaret Tracy’s health began to fail, but her commitment to securing the school’s academic position kept her firmly in the deanship. She continued with the assistance of supportive faculty members until she retired in spring of 1955. In 1954 nursing faculty began meeting on a bi-monthly basis as a committee named “Full Time Members of the Faculty of the School of Nursing at the Medical Center.” In order to maintain the direction of the school while the recruitment and hiring of a permanent dean continued, June Bailey served as interim dean for the year 1956, and three faculty formed a “committee deanship” in 1957. The preferred candidate, Helen Nahm, was appointed in mid-March, with advice from the existing faculty that she should not accept the deanship unless she was made full professor. As late as 1957 the Academic Senate’s powerful budget committee attempted to thwart the school by drastically cutting its budget. Yet, by the mid-1950s, the contested status of the school of nursing would be visibly strengthened by the construction of a multimillion dollar complex of a new university hospital and health sciences buildings designed to accommodate instructional and research facilities for  all four Parnassus health professions.

A Giant Step Towards the Future in Health Sciences 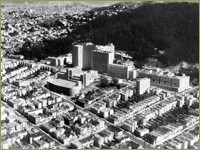 Aerial View of the UCSF Campus in the early 1960s.
By mid-century, the University and the state embarked on a massive postwar construction plan involving all campuses. The regents' long-stated intention to consolidate the school at San Francisco prevailed over the arguments of the Berkeley faculty and in 1949 they officially designated the Parnassus campus as the UC Medical Center in San Francisco, and renamed the UC Medical School the "UC School of Medicine." After forty-four years of pronouncements on the need to unify the instructional programs of the medical school, actual plans were finally being made to expand the Parnassus campus to include departments of biochemistry, anatomy and physiology. In early 1950 blueprints were released revealing plans for a twelve-story cross-shaped teaching hospital with two additional stories to be completed at a later date. 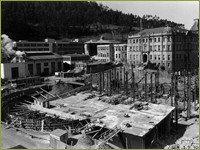 UCSF campus under construction, 1951
This hospital would be linked to a fourteen-story Medical Sciences Building. Construction at Parnassus continued for the next five years and the new medical center officially opened on March 13, 1955. Newspapers hailed the new structures as "shining functional monuments to health and health education." In June, 240 patients were moved into the 485 bed Moffitt Hospital, named for Herbert C. Moffitt who had served as dean, faculty member and chief of medicine for thirty seven years. Construction continued, and Increment I of the Medical sciences building was completed in 1956 as basic science faculty in anatomy, biochemistry and physiology prepared for their move across the bay.

Important shifts in UC leadership occurred during the construction of these imposing new buildings, for the entire university system was undergoing dramatic expansion and decentralization in the postwar years. By the mid-1950s university enrollment stood at 44,000 and administrators were anticipating a tripling of enrollment in the next two decades. In response to these pressures, acquisition and development of new and existing campuses began in earnest. Between 1945-1958 the University acquired the Santa Barbara campus and developed liberal arts colleges at Davis and Riverside, and in 1951 a new four-year medical school began admitting students at UCLA. New general campuses would be added in the next decade bringing the total to nine separate sites, and five medical schools would eventually become a part of the UC system including the oldest one in San Francisco. In 1952, Clark Kerr, a young Berkeley professor of Economics and Industrial Relations, was appointed first chancellor of the Berkeley campus and he proceeded to work on academic and physical planning for the University. 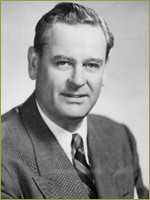 John Saunders, Provost
In 1954, UC School of Medicine Dean Francis Smyth resigned after twelve years of service. In 1956 he was replaced by anatomist John Saunders, a popular choice among Parnassus clinicians. By assuming the deanship, Saunders became, in effect, the leading campus spokesman in the UC hierarchy, for he also held the influential position of Chief Campus Officer, representing San Francisco on the administrative advisory committee composed of deans from all campuses. As the University expanded, a system of provosts and chancellors replaced this advisory committee, part of a general movement towards autonomy for the individual campuses.

Thus, in 1958 John Saunders was named provost of the San Francisco campus as part of the decentralization process, and in 1964 became the first chancellor of the new San Francisco campus. The other colleges and schools flourished in their spacious new quarters in the medical sciences building. In 1955, Pharmacy was officially designated as the School of Pharmacy under the continuing leadership of Dean Troy Daniels. In 1956 the Academic Senate made the College of Dentistry into the School of Dentistry with Willard Fleming serving as both Dean and Vice-Provost of the San Francisco campus.  At this juncture, Dentistry, Medicine, Nursing, and Pharmacy were officially named as schools, bringing bureaucratic uniformity to the historical professional programs at the San Francisco Campus.

>> 1958: The Watershed Year for the San Francisco Campus