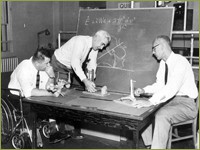 Biomechanics laboratory, 1957
From the time of the creation of the Biomechanics Laboratory (1957) and the Cardiovascular Research Institute (1958), organized research units (ORUs) and centers continued to be established largely as a result of the successful recruitment of national research grants and private endowments. Among the developments throughout this period were:


When Helen Nahm became Dean of the School of Nursing in 1958, she was advised of the central role that original research was expected to play in faculty work in professional schools. In 1963, the School of Nursing Faculty Organization established the Research Committee, which early on had $7,500 to allocate annually for research projects, and throughout the following decade approaches to research modeled after the laboratory sciences on the one hand, and the social sciences on the other, began to take shape. However a number of projects among School of Nursing faculty resulted in publications that had immediate and long-lasting impact on both the clinical and social understanding of health care and became landmark publications for research methodologies. This includes Jeanne Quint’s 1967 book The Nurse and the Dying Patient and the studies on death in hospitals by Barney Glaser and Anselm Strauss, Awareness of Dying (1965) and Discovery of Grounded Theory: Strategies for Qualitative Research (1967). 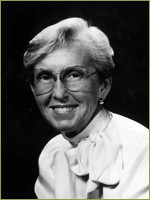 Margretta Styles
With increasing numbers of faculty trained with PhDs, research further flourished in the 1980s, particularly under the leadership of Dean Margretta Styles (dean 1977-1986). Styles allocated resources, catalyzed the development of a faculty that viewed research as an integral part of their work, and supported successful efforts to develop extramural research funding.

When Jane Norbeck became Dean of the School of Nursing in 1989, faculty identified "research clusters" that promoted innovative approaches in areas such as symptom management, HIV/AIDS, family health and disease prevention. These initiatives subsequently evolved into organized centers for research such as the Institute for Health and Aging, The Research Center for Symptom Management, the International Center for HIV/AIDS Research and Clinical Training in Nursing. 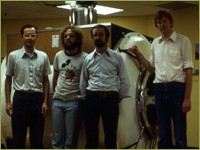 Some of the UCSF/UC Berkeley crew in 1981 working on the development of an early clinical MRI
In 1975, following its success in proving the usefulness of CT Scanning, the UCSF Department of Radiology funded a small startup R&D operation involving a handful of engineers and physicists charged with the task of developing Nuclear Magnetic Resonance (NMR, now known as MRI) as a viable imaging instrument for soft tissues in the human body.

In 1983, this pioneering group produced clear, dramatic images, featured at the Radiological Society of North America in 1983, obtained FDA pre-market approval for their device, and directed some of the first clinical placements of NMR imagers in the United States.

In 1973 UC San Francisco biochemist Herbert Boyer and his Stanford collaborator Stanley Cohen revolutionized the field of biology by sketching out, on a paper napkin in a Hawaii delicatessen, a plan which became the technique for recombinant DNA or gene splicing. Boyer went on to co-found Genentech Corporation in 1976.

In 1977, William Rutter and colleagues achieved the first major triumph of genetic engineering by isolating the gene for rat insulin and transplanting it into bacteria, creating protein “factories” in the process. This led to the development at UCSF and elsewhere of a whole new group of artificially-created therapeutic products, such as hepatitis B vaccine, and the mass-production of substances produced naturally in only minute amounts, such as human growth hormone and human insulin. It also created a whole new approach to research in the biological sciences. In 1986, William Rutter cloned the gene for hepatitis B and Chiron Corporation, which Rutter co-founded, distributed the first genetically engineered human vaccine.

In 1976 virologists J. Michael Bishop and Harold Varmus discovered that “oncogenes” – cancer-causing genes – can be found in many forms of life, including humans. This finding led to a new understanding of how normal cells are transformed into cancer cells by environmental, hormonal or other factors. It also led to the now widely accepted view that oncogenes are responsible for at least some cancers. Bishop and Varmus received numerous awards, including the Albert Lasker Award for Basic Medical Research (1982) and the Nobel Prize in Physiology or Medicine (1989), for this work. (For more on Chancellor J. Michael Bishop, research on oncogenes and the Nobel Prize, click here.)

In 1982, Stanley Prusiner identified prions, an entirely new infectious agent implicated in rare slowly progressing brain diseases such as mad cow disease in cattle and Creutzfeldt-Jakob disease in humans. Composed solely of protein, prions are able to replicate, aggregate and cause deadly infections without RNA or DNA, the first infectious agents known to do so. The discovery of prions led to breakthroughs in research for neurogenerative diseases such as Alzheimer’s and Parkinson’s. In 1990, UCSF received $3 million to establish the W.M. Keck Foundation Center for Integrative Neuroscience. Under the direction of Stephen G. Lisberger, the Center combines studies of the brain and behavior in an effort to uncover the biology underlying such serious health problems as Alzheimer’s and Parkinson’s diseases. Dr. Prusiner has won numerous awards for this research, including the Nobel Prize in Physiology or Medicine in 1997.


UCSF and the AIDS epidemic 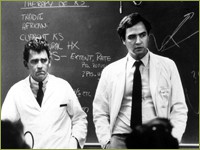 Marcus Conant and Paul Volberding discussing Kaposi’s Sarcoma, 1981
In 1983 UCSF clinicians and researchers started the country’s first outpatient AIDS clinic and inpatient ward at San Francisco General Hospital and mounted an enormous multidisciplinary effort to fight the disease. This was barely two years after the first AIDS cases from Los Angeles were reported in the Morbidity and Mortality Weekly Report (MMWR) on June 5, 1981. Before long it was recognized that the mysterious illness—which was first known as GRID, gay-related immune deficiency—was present among gay men in San Francisco, where the number of reported cases rapidly multiplied over the next few years. Unlike anywhere else, the gay community in San Francisco united to encourage political and social support and care for the patients, while the medical teams at UCSF and San Francisco General Hospital struggled to identify and treat the disease, which was linked to HIV in 1984.

A diverse group of physicians and researchers were brought together to explore the epidemic:

Wofsy, who went on to become an international expert in Pneumocytosis and AIDS in women, joined Volberding and Dr. Donald Abrams as the original “AIDS physician team” in the new clinic at SFGH. Another addition to AIDS research and treatment was provided by Drs. Deborah Greenspan, a specialist in oral medicine, and John Greenspan, an oral pathologist, both at UCSF’s School of Dentistry. The Greenspans pioneered the role of dentistry in AIDS research. Deborah Greenspan investigated the relation of oral lesions to the presence and progression of AIDS, and, with help from basic scientists Evelyne Lennette and Harold zur Hausen, identified hairy leukoplakia which became a diagnostic marker of AIDS. Through his pathological investigations, John Greenspan linked lymphoma to the immunodeficiency of the patients with Pneumocytosis and Kaposi’s sarcoma. The list of faculty from across UCSF and the Medical Center who were involved in the crucial early developments in the recognition and treatment of HIV/AIDS continues, and researchers are encouraged to consult the collections in the AIDS History Project for more information.


Program in Biological Research (PIBS)
In 1988, UCSF received a $13.75 million five year grant from Miami-based Lucille P. Markey Charitable Trust to help create a new academic program that transcends departmental boundaries for biological research, called the Program in Biological Research (PIBS). It focused on using tools from genetics, molecular biology, and immunology, and was directed by J. Michael Bishop, who was also the Director of the Hooper Foundation. That same year, UCSF received $7.1 million four year grant from the National Institute of Mental Health and the National Institute of Drug Abuse to expand its AIDS research. This grant supplemented a $3 million grant awarded the previous year to establish a new Center for AIDS Prevention Studies (CAPS). The program created a unique collaborative partnership between UCSF, the San Francisco Department of Public Health, and the Bayview Hunters Point Foundation.